In response to recent COVID-19 concerns, we are writing to assure our clients that we are taking extra precautions into our daily routines. Our equipment is cleaned pre/post all treatments and our doorknobs and seating areas are cleaned multiple times each shift during the day. We have a spacious office so necessary standards are easily met.

Call us to schedule an appointment!

PLEASE NOTE: If you have been feeling ill, or around someone who has been feeling ill with unusual or known related COVID-19 or flu symptoms, please allow your activities to be suspended and self-quarantine.

Would you like to switch to the accessible version of this site?

Don't need the accessible version of this site? 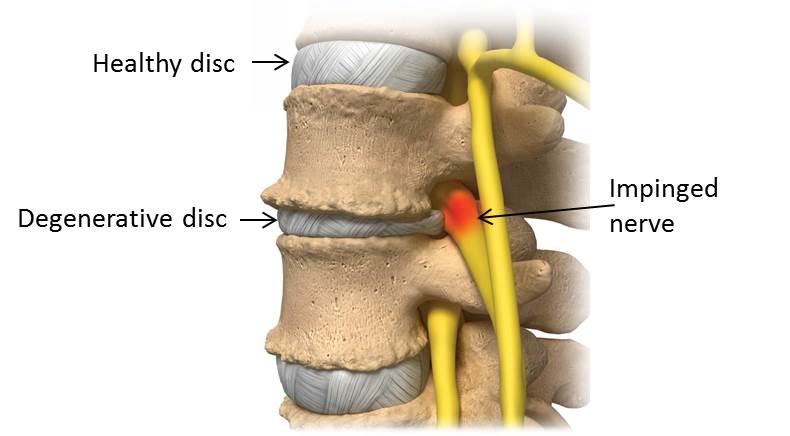 What is degenerative disc?
Degenerative disc disease is  a term used to describe the normal changes in your spinal discs as you age. Spinal discs are soft, compressible discs that separate the interlocking bones  that make up the spine. The discs act as shock absorbers for the spine, allowing it to flex, bend, and twist. Degenerative disc disease can take place throughout the spine, but it most often occurs in the discs in the lower back (lumbar region) and the neck (cervical region). What causes degenerative disc disease? As we age, our spinal discs break down, or degenerate, which may result in degenerative disc disease in some people. These age-related changes include: The loss of fluid in your discs. This reduces the ability of the discs to act as shock absorbers and makes them less flexible. Loss of fluid also makes the disc thinner and narrows the distance between the vertebrae. Tiny tears or cracks in the outer layer (annulus or capsule) of the disc. The jellylike material inside the disc (nucleus) may be forced out through the tears or cracks in the capsule, which causes the disc to bulge, break open (rupture), or break into fragments. These changes are more likely to occur in people who smoke cigarettes and those who do heavy physical work (such as repeated heavy lifting). People who are obese are also more likely to have symptoms of degenerative disc disease. A sudden (acute) injury leading to a herniated disc (such as a fall) may also begin the degeneration process.   As the space between the vertebrae gets smaller, there is less padding between them, and the spine becomes less stable. The body reacts to this by constructing bony growths called bone spurs (osteophytes). Bone spurs can put pressure on the spinal nerve roots or spinal cord, resulting in pain and affecting nerve function.

What are the symptoms?
Degenerative disc disease may result in back or neck pain, but this varies from person to person. Many people have no pain, while others with the same amount of disc damage have severe pain that limits their activities. Where the pain occurs depends on the location of the affected disc. An affected disc in the neck area may result in neck or arm pain, while an affected disc in the lower back may result in pain in the back, buttock, or leg. The pain often gets worse with movements such as bending over, reaching up, or twisting. The pain may start after a major injury (such as from a car accident), a minor injury (such as a fall from a low height), or a normal motion (such as bending over to pick something up). It may also start gradually for no known reason and get worse over time.   In some cases, you may have numbness or tingling in your leg or arm.

How is degenerative disc disease diagnosed?
Degenerative disc disease is diagnosed with a medical history and physical exam. Your doctor will ask about your symptoms, injuries or illnesses, any previous treatment, and habits and activities that may be causing pain in the neck, arms, back, buttock, or leg. During the physical exam, he or she will: Check the affected area's range of motion and for pain caused by movement. Look for areas of tenderness and any nerve-related changes, such as numbness, tingling, or weakness in the affected area, or changes in reflexes. Check for other conditions, such as fractures, tumors, and infection. If your exam reveals no signs of a serious condition, imaging tests such as an x-ray, are unlikely to help the diagnosis. Imaging tests may be considered when your symptoms develop after an injury, nerve damage is suspected, or your medical history suggests conditions that could affect your spine, such as bone disease, tumors, or infection.